Moving all activity over to The Scratch Pad. You can read the Franken Fran review here: http://therealscratchpad.wordpress.com/2010/08/23/comic-review-franken-fran/

Music and Animation: Part One

Check out my post on some of my favorite cartoon composers for present-day animated television series over here!

Posted in Other Articles

Even if you aren’t a fan of comics, you might heard of the creative team “Man of Action”. Creators of the animated series Ben 10, a successful Cartoon Network action series that has spawned countless toy-lines and two sequel series that were both headed by Dwayne McDuffie (Static Shock, Justice League Unlimited). Having created such a huge franchise for them, Cartoon Network was obviously interested in any else that the group might pitch to them. And the guys had just the idea: an adaptation of Joe Kelly and Duncan Rouleau’s failed comic M. Rex, which was published by Image, which the network snapped up right away. While some things were changed, such as the main character’s age, the basic essence and idea of the comic made it to the screen. But is Rex any good?

Rex is our protagonist and our guide through the world of “Generator Rex,” serving as the narrator at the beginning and end of each episode. Rex is often acts like a jerk and rarely listens to authority: something that is completely justified. He is a teenager who has no memory of his past before an mysterious event that caused both him and every other living thing on the planet to become infected with microscopic machines known as nanites. Most of the time, the nanites do nothing and are generally harmless: but they can occasionally get out of control and mutate its host into a monster called an EVO. However, unlike other EVOs, Rex has control over his nanites and can use them to transform parts of his body into weapons and various other gadgets. Rex can also use his nanites to shut down the nanites of other EVOs, thus “curing” them. It’s this ability that has Rex locked up by an organization known as Providence, which treats him as a tool and little else. Rex has no freedom, his only friend is a chimpanzee, the guy has no idea who he really is, and he is rarely treated as a human being (resulting in low self-esteem, which can affect his powers). Rex is a jerk at times, but he has a right to be one with how bad his life is.

Other characters include Bobo Haha, Agent Six, and the villain Van Kleiss. Bobo Haha is a talking chimpanzee that serves as Rex’s trusty sidekick and best friend. The primate is the show’s manadatory comic relief, making biting commentary on the events that occur around him, from Rex’s attempts at flirting with Dr. Holiday to a huge fight with a dangerous EVO. Agent Six is described as Rex to be a “nanny, just more argo.” The sixth most deadly man in the world, he serves as Rex’s caretaker and in turn, a father figure in some ways. Possibly being an EVO himself, Agent Six is both the sixth most deadly man in the world and quite an emotionally distant person, hiding any feeling he may have behind a figurative mask. Then there is Van Kleiss, who is bound to the very Earth itself and as such, cannot die as long as he is in the area surrounding the lab where the nanite accident occurred. But with this power comes an unstable body that requires a constant stream of fresh nanites to stay alive.

The writing and storyboarding for this series is great: the action series are well-choreographed, and there was never a time where the dialogue seemed weak or cheesy. I can take the premise seriously, not raising an eyebrow at any of the events, and the basic story behind the nanite event was told to the viewer right away. That may have been good choice, considering that event is not so much the focus of the show as is Rex’s unknown past. Getting it out the way early may allow the writers to focus on other things such as Van Kleiss, The Pack, and Rex’s relationship with Circe. The voice acting is incredibly well-done, with the only hiccup being early in the episode, when Rex was crashing into the side of a building. The animation is clean-and-smooth, working really well with the character designs. There really isn’t much else to say, other than this is a series that is off to a great start.

Where will you run to?

If you haven’t heard of “Adventure Time” by now, then I’m surprised to see you even reading this. “Adventure Time” started out as a surreal short cartoon made for a program called “Random Cartoons!,” a collaboration between Frederator Studios and Nickelodeon. Created by CalArts graduate Pendelton Ward, the original cartoon was a huge hit, garnering over 2 million views online when it was first posted in 2006. It was unlike anything out there, with its surreal yet laid-back humor and simple artwork. With all this popularity behind the original short, Nickelodeon deemed it fit to make it a series: but due to creative differences, Cartoon Network eventually was the channel to turn this quirky ‘toon into a full-length show.

Starting in December 2009, the network began advertising the series: the closer it got to April, the more they hit the viewers with promos and sneak peeks at the upcoming show. The series was hyped by Cartoon Network to be their newest hit, and by the internet to be the next “Spongebob Squarepants” in terms of popularity. But does “Adventure Time with Finn and Jake” live up to the high expectations that were set?

“Adventure Time with Finn and Jake” takes place in the mystical Land of Ooo: where some areas are made purely of fire and others places stuck in perpetual winter. Ooo is a vast land where you can find anyone and anything imaginable.  Anthropomorphic nuts? Check. Portals to different dimensions? Check. Sexy vampire ladies? Double check. With wide grass plains, deep forests, and tall mountains, the Land of Ooo seems custom-made for a budding adventurer. With so many places to go in their world, Finn and Jake always have a place to explore or just have some good old fun.

On that note, Finn and Jake are the epitome of best buddies. In other cartoons, best friends have a tendency to constantly fight to the point that the viewer can doubt that the two really are friends. There is no such issue here: Finn and Jake’s relationship really shines through and mirrors a real friendship: often joking with each other, hanging out and having fun, and always being there for the other. If you boil the duo down to their cores, then you’ll find that they are basically two halves of a whole: Finn is the adventure-seeking energetic one, while Jake is more go-with-the-flow and lazy. It’s slightly yin and yang, and it works since Jake is often the more rational one and less likely to panic. Jake can serve as moral guide to Finn, while Finn is able to make Jake more outgoing. 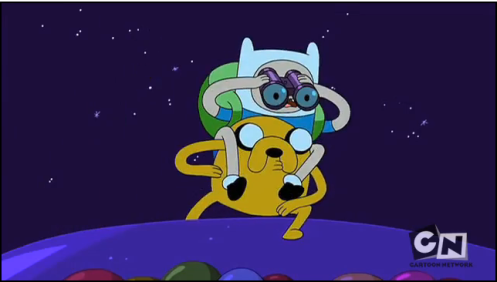 The animation is top-notch: traditional animation done with a 30s-40s rubberhose feel to it. The characters have stretchy, wiggly limbs that have no real joints: an art style that can be hard to animate. Pen Ward’s cartooning style is simple, and is more something you’d find in a person’s sketchbook rather than on television. There are only general guidelines to follow when drawing these characters. Beyond those, you can draw them any way you want, and if you look closely, each artist’s style comes through via the way they draw the limbs and such. And in contrast to the faux-naïf art style are incredibly detailed backgrounds, filled with various colors and textures. It works effectively, and you can really believe that the human and dog actually reside in this world.

The writing for the series is done by the storyboard artists themselves, working from a plot outline and fitting in their own jokes while punching up others. Something that must be remembered is that this is an animated series that prides itself on surreal humor. If something doesn’t make sense to the viewer, it really does due to how their world functions. But someone who wasn’t aware of this program’s nature could come in completely and utterly confused, coming away with the idea that the show is nothing but stupid. For example, in the episode Slumber Party Panic when Finn breaks a promise he made to a friend, time freezes and two gumball machine giants come and threaten to kill him if he can’t solve the equation 2+2. It’s strange, but it makes sense if you understand the show and pay attention to background elements. That said, the writing is great if you’re into surrealism: many of the jokes hit their mark, and if one doesn’t, then expect another joke to come up and redeem it. Nothing seems forced: its the people behind the show simply bouncing gags off each other, not straining to figure out a funny line Jake could say or an expression Princess Bubblegum could make.

Check it out, I downloaded a little dance.

In the end, does “Adventure Time with Finn and Jake” live up to the hype? Yeah, in my opinion it does. But whether it becomes Cartoon Network’s Spongebob depends on how much of the original fans stick around, and if it can gain an even larger following from a group that sees what the show is going for…and likes it.

View this document on Scribd